Created by http://www.cable.tv
Posted by Scott Stevens at 8:32 AM 2 comments:

If you're anything like me, you avoid bunkers at all cost.  I'd much rather a 25 yard shot from the rough as opposed to a 5 yard shot from a bunker.  It's something I'm hoping to work on throughout the year ahead, and here's a great tip from Greg Norman which I'll be practicing this week.

Posted by Scott Stevens at 3:09 PM No comments:

Email ThisBlogThis!Share to TwitterShare to FacebookShare to Pinterest
Labels: All Posts, Swing Tips

What to Watch on TV

Sometimes it's nice to sit back, put your feet up and watch some golf on TV, and this evening would be the perfect time to consider exactly that. Have a look at these sneak peak video previews of a few golf shows airing tonight on Golf Channel...

Posted by Scott Stevens at 5:10 PM No comments:

Email ThisBlogThis!Share to TwitterShare to FacebookShare to Pinterest
Labels: All Posts

McIlroy May Lighten Load in 2013

After my post last week 'McIlroy Wins PGA Player of the Year', we thought we'd check in and see how he's handling the additional spot light attention...

Following a surprising missed cut at this week's UBS Hong Kong Open, world No. 1, Rory McIlroy hinted that a lighter schedule may be in the cards for him in 2013.

"I've probably played an extra couple tournaments too much and I have learned from the last few years," the Ulsterman explained to reporters. "That's why I'm cutting back my schedule even further from next year."

Including next week's season finale in Dubai, McIlroy will have played in 24 events this year in addition to two exhibition events - the Turkish Airlines World Golf Final and the Duel at Jinsha Lake with Tiger Woods. Last year, he played in 22 events as well as four exhibitions.

"I now look back over the last couple years and wonder why did I stretch myself so much," he added.

Having wrapped up the Race to Dubai title with a third-place finish at last week's Barclays Singapore Open, McIlroy explained that a dip in on-course performance may have been inevitable.

"When you achieve something that you want to achieve so bad, like the Race to Dubai, there is a letdown considering there are still two events remaining," he told media members.

As the 2012 season winds down - one in which he won a major, ascended to the top of the OWGR and captured the money titles on both the PGA and European Tours - McIlroy notes that this year may have taken a larger toll than he anticipated.

"I'm not sure if the energy in trying to sew up the Race to Dubai and competing in the FedEx Cup has taken more out of me than maybe I thought," McIlroy commented. "Because while I am feeling OK physically, mentally I feel really tired."
Posted by Scott Stevens at 4:30 PM 2 comments: 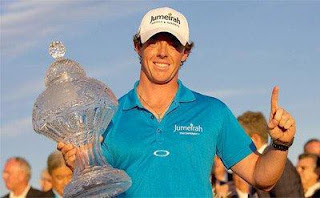 Other season-ending awards still be announced include the Arnold Palmer (leading money winner) and Byron Nelson (lowest adjusted scoring average) awards.
Posted by Scott Stevens at 10:57 AM No comments:

Youngest Player Ever Qualifies for 2013 Masters

Chinese teen sensation Tianlang Guan made history Sunday by capturing the Asia-Pacific Amateur Championship and an invitation to the Masters in the process.

Guan, 14, fired a 1-under 71 Sunday at Amata Spring Country Club in Chonburi, Thailand, to finish the event at 15-under 273 and hang on for a one-stroke victory. The youngest player in this week's field, Guan completed a wire-to-wire victory and will become the youngest competitor in the history of The Masters.

Guan will be 14 years, five months and 17 days when he tees it up at Augusta National next April. The previous record was established by Matteo Manassero in 2010, when the 16-year-old earned an invitation after winning the British Amateur Championship in 2009.

"I'm excited. I'm really happy to become the youngest player at the Masters and look forward to going there," Guan said after the round. "I don't know what's going to happen there, but I know I just want to do well."

Guan began the day with a two-stroke lead and saw his advantage balloon to five during Sunday's final round. Once Pan Cheng-tsung of Chinese Taipei, the No. 2 amateur in Asia, closed with a 7-under 65, Guan's lead was trimmed to one shot as he played the final hole. After his chip rolled five feet past the hole, Guan calmly holed his par putt for the historic win.

Both Guan and Cheng-tsung will also receive a spot in International Final Qualifying for the 2013 British Open.

Australian teen Oliver Goss, who entered the final round in second place, finished in third at 12-under, three shots behind Guan. Two-time defending champion Hideki Matsuyama, Asia's top-ranked amateur, closed with a 4-under 68 to finish fourth at 10 under.
Posted by Scott Stevens at 4:21 PM 2 comments:

Ahhhh retirement ... nothing but piña coladas and working on your handicap. While we're not exactly sure how good former NBA superstar Yao Ming is at sipping tropical drinks, (we suspect he uses an unusually long straw) his golf game could use a little work.


Yao was playing at the World Celebrity Pro-Am in Haikou, China along with actors and celebrities like Ryan Reynolds, Michael Phelps, and Minka Kelly. Chinese actor Wang Zhiwen won the celebrity side of the event while Matt Kuchar took top honors in the professional portion.
Posted by Scott Stevens at 3:49 PM 2 comments:

Email ThisBlogThis!Share to TwitterShare to FacebookShare to Pinterest
Labels: All Posts, PGA
Older Posts Home
Subscribe to: Posts (Atom)
Welcome to Eat Sleep Golf -Vancouver. Have a look around as we continue to shine light on the innovation and creativity found throughout the Vancouver golf community.